Our group is a welcoming, down earth group led by experienced teachers with many years of experience of Capoeira Angola in Brazil. Both Beginners and those who have done capoeira before are welcome.Join our blossoming group learning to play Capoeira. While learning to keep your wits about you you will learn movement, music, rhythm and new ways of looking at the world. Capoeira is one of the defining arts of African Brazil expressing the essence of resistance to oppression, dedication to beauty and skill and collective play. Enslaved African's provided the base on which Capoeira Angola developed into a mature art form with complex music, lyrical, ritual and physical self-expression. Classes currently on Wednesdays at 7.30

People have been asking me to translate the C.V that Armando wrote below! Rather than translate it all I will try and give you a flavor of Armando and what he is saying.

Armando Teixeira Leão, Mestre Armando is one of the names that helped to write the history of Capoeira Angola, first in Rio and then in Fortaleza Ceara from the 1970s untill now.

A direct student of Mestre Moraes - Armando started capoeira in 1974 with Mestre Marco Aurelio in Rio and later became a Master under Mestre Moares. He was part of one of the strongest and most significant generation of Angoleiros from Rio. He has had many students in Rio and was well known in all the rodas particularly those involving the black consciousness movement.
As a result of Capoeira he became racially aware and a member of the black movement in Brazil. In the 90s he moved to Fortaleza in the state of Ceara and begins a Capoeira Angola group and gets involved in afro-brazilian social movements in defence of black culture.

He has worked with lots of NGO's and different movements. From 2001 his group was part of GCAP but then left GCAP in the end in 2008.

In Fortaleza he and his group have always been known to be linked to the key social movements and causes particularly those that involve black and African cultural issues. Today he works as an Executive Coordinator for policies of racial equality.

Posted by Paul Healey and Vitoria Aranha at 18:35 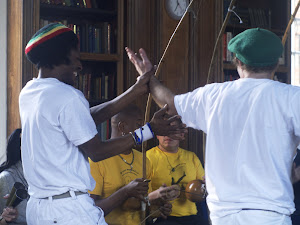 These pages are about Capoeira Angola in South London. We have classes Wednesdays from 7.30-9.00pm at Moorlands Community Centre in Brixton.

We will use these pages to share our experiences and activities relating to Capoeira Angola.